[Evan] was perusing his local thrift store when he found a beautiful IBM Model M 122-key keyboard made in 1987.

“This is my keyboard, there are many like it, but this one is mine.”

In [Evan’s] case, this might actually be the only one like it still in use today. An idea formed in his head. What if he took this ancient keyboard, gave it a USB driver, and customized the keys on a hardware level to do exactly what he wanted.

The first step was converting it to USB. He’s using a Teensy 2.0 mostly because it is super inexpensive, and its able to act as a USB HID device. In addition to wiring up the keyboard to the Teensy he’s also added foot pedals that connect via 1/8″ stereo plugs — these kind of act like extra mouse buttons, allowing him to scroll through galleries left to right, add page breaks, and other macros to increase efficiency.

Such an old keyboard has many keys that no longer exist, and some that are missing altogether, like the Windows key. [Evan’s] next step was to re-label the keys to their new functions. As a member of his local hackerspace, i3Detroit, he hoped he could simply laser etch new symbols onto his keys. Sadly, no matter what setting they tried, it just ended up melting the plastic. They discovered something that might work though — a product called Thermark, a fantastic (and expensive!) product that will bond to metal with a low-power laser. Some experimentation later, and they discovered they could get it to reliably bond to plastic as well! 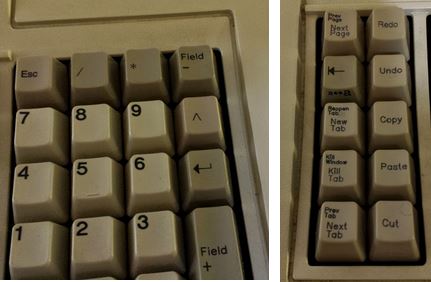 With a bit of practice they were able to coat the keys in Thermark, laser etch over top, and then clean off the excess material leaving clear text behind. Not bad!